"Brutal Recession Destroyed Americans' Wealth, Net Worth Down 40% in 3 Years" 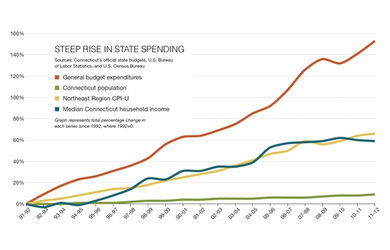 Steep Rise in State Spending
Since 1992, state government spending in Connecticut has jumped 153% to more than $20 billion this fiscal year. How did we get here? The state's population grew just 9% over the same period. We've not seen any job growth in those two decades. Household median income certainly hasn't matched that pace.

Costs for servicing state borrowing increased 204%, Medicaid spending rose 180%, and corrections spending was up 178%. In contrast, spending on education experienced the largest decline of any budget item over the last 20 years. Infrastructure investments also suffered.

Debt climbs
Meanwhile, the state's debt has more than doubled, climbing 142%.  CBIA today released a comprehensive report on state spending and it illustrates how spending policies are as much to blame for the state’s current budget woes as the slow economic recovery.  President and CEO John Rathgeber said CBIA produced the report to highlight the state’s fiscal challenges and share what he called “high-reward” spending reforms.

“It’s time to adopt the comprehensive policy changes needed to control spending, develop fiscal discipline, and make government more efficient,” he said. “That’s the most viable economic development strategy we have as a state.  “By making the tough decisions needed to address our fiscal challenges, lawmakers will renew business confidence in Connecticut, giving employers the confidence to invest, grow, and create jobs here.

“If we continue to spend beyond our means, we’re putting our economic health at risk. We have an opportunity to turn the tide and restore sound fiscal practices and a healthy economy to Connecticut.”

Reform recommendations
The report outlines a series of reforms, including those developed by the Connecticut Institute for the 21st Century and others adopted as best practices in a number of states, across five key areas:
Best practices
CBIA economist Pete Gioia said other states successfully implemented a number of the recommendations contained in the report, resulting in billions of dollars in savings and greater accountability to taxpayers.

“Rhode Island just raised the retirement age for state employees and increased employee pension contributions,” Gioia said. “Those actions should save taxpayers an estimated $3 billion over the next 10 years.

“In Illinois, reforms to that state’s Medicaid program, including switching recipients into managed care and monitoring eligibility requirements, will save over $2.5 billion.”