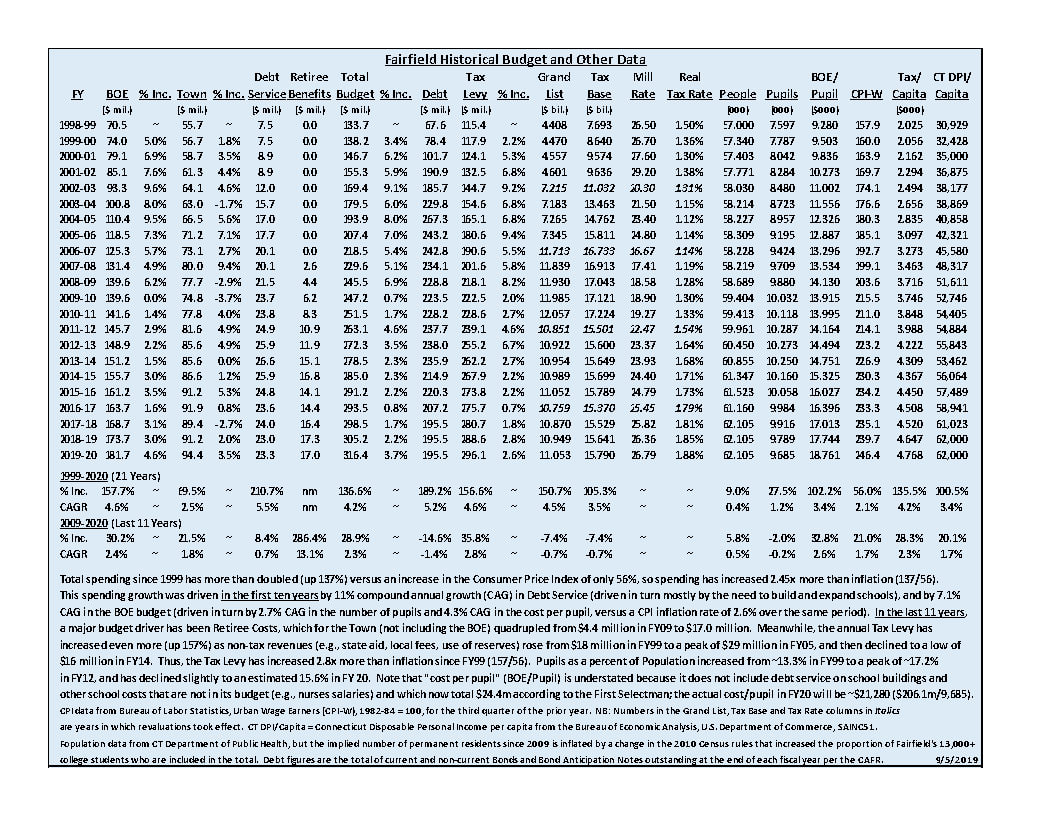 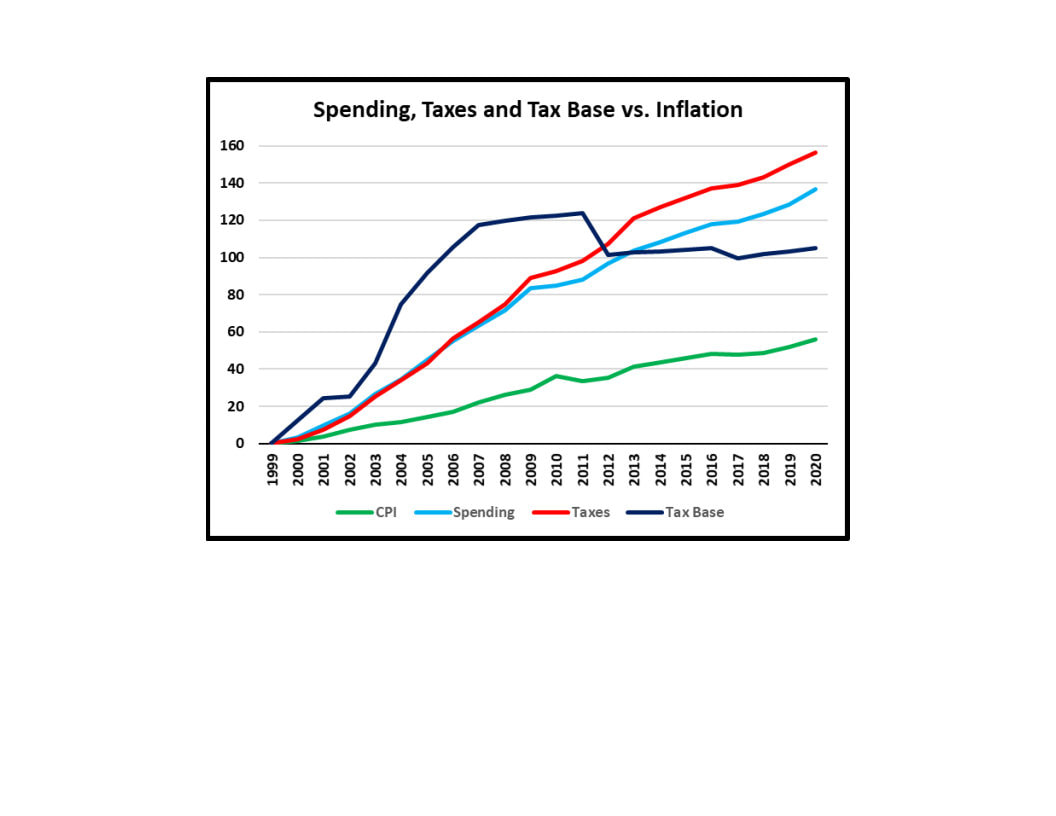 The Representative Town Meeting, in an evening that included various caucuses and votes along party lines, approved the town’s 2019-20 budget with cuts to the Department of Public Works and schools.
After Monday night, the Fiscal Year 2020 budget comes in at $316,416,739 or a 3.68 percent increase in expenses from the current year. According to Chief Finance Officer Bob Mayer, the mill rate would amount to 26.81 mills, representing a 1.71 percent tax hike. The Board of Finance can still adjust the mill rate at their April 9 meeting, when it’s scheduled to set the final rate. Read More: Fairfield Citizen 5.8.19

The Board of Finance held a public comment session last Saturday, giving residents an opportunity to comment on the recently proposed fiscal year 2019-2020 annual town budget, with student and senior citizens among their top concerns. “Feedback from our residents is a very important part of the budget process,” said First Selectman Michael Tetreau. “The Saturday morning forum by the Board of Finance has become one of our community traditions during budget season.”

New this year, the Board of Selectmen and Board of Finance held two separate budget hearings. The Town of Fairfield’s budget process begins in January and ends in May. Held in the Fairfield Ludlowe High School auditorium, dozens of concerned residents lined up to the microphone to have their voices heard; each was allowed a max of two minutes. Several senior citizen advocates spoke of concerns related to the elder population, as did residents with school-children with education concerns, including a fourth grade student speaking about education cuts. “I’m speaking as a representative of Fairfield senior advocates, there are at least 9,000 of us,” said Beverly Silverman. “We live here, we pay taxes and we feel we are being ignored. I ask that we will be in your consideration for next year’s budget.” Read More: Fairfield Citizen 3.31.19

A SEEMINGLY MODERATE 2.2% PROPOSED TAX INCREASE HIDES ANOTHER UNSUSTAINABLE INCREASE IN BOE SPENDING AND PRETENDS THAT OUR TAX BASE IS RISING, NOT FALLING

WE URGE ALL TAXPAYERS TO EXPRESS THEIR VIEWS ON SATURDAY MORNING 3/30/19 AT THE BOARD OF FINANCE PUBLIC BUDGET MEETING – 9:30 AM AT LUDLOWE HS
Unfortunately, that seemingly moderate 2.2% increase in the mill rate hides continued unsustainable growth in spending, and it significantly understates the increase in our real tax rate by ignoring the continued decline in our tax base.  In the 2010 and 2015 revaluations, Fairfield’s Grand List declined 10% and 3%, respectively, and home values remain under pressure.  For example, New Canaan’s recently completed 2018 revaluation resulted in a ~7% decline in its Grand List, which over the five-year period works out to ~1.4%/year.  If Fairfield’s 2020 revaluation produced a similar result, the real tax rate increase proposed for FY2020 would not be 2.2% – it would be 4.5% (2.2% + the nonexistent 0.9% assumed increase in our Grand List + the New Canaan 1.4% average annual decline).  The decline in Fairfield’s tax base will probably not be as great (because Fairfield has proportionately fewer higher-end homes, where the weakness is greatest and where the new restriction on the deductibility of state and local taxes will hurt the most), but at least some of the assumed ~1% annual increases in the Grand List that are currently understating our Mill Rate are likely to be reversed.

The continued decline in our tax base because of declining home values and the lack of significant commercial development (e.g., at Metro Center) is a very serious problem about which every taxpayer in Fairfield should be extremely concerned.  Indeed, for any political entity – town, city, county, state, nation – there is no more serious problem than a declining tax base.  The vicious cycle of raising tax rates on a declining tax base never ends well.

Meanwhile, we should also be extremely concerned that the State of Connecticut continues to struggle, as is perhaps most apparent in the fact that the State has not created any net new jobs in over 30 years – nonfarm jobs of 1.7 million today are the same as they were in 1988 – a period during which our neighbors, New York City  and Massachusetts, created ~25% more, rising to ~4.5 million and ~3.7 million, respectively.  Instead of cutting its unsustainable spending, the State is planning to raise taxes again to close the projected $1.5-$2.0 billion budget deficits in its ~$20 billion annual budgets for the next two years.  Other strong possibilities for bad news from the State include further cuts in municipal aid, and the transfer of some portion of teacher pension costs to “wealthy” towns like Fairfield.
The standard response from the BOE has been that they are merely informing the Town what the educational programs they recommend for our children will cost, and that it up to the BOS, BOF and the RTM to determine what the Town can afford.  The reality is that once they have approved a budget, the BOE launches a strong and usually successful lobbying effort to get their budget approved, whether the Town can afford it or not.

Parents with children in our schools, who represent ~30% of total households, along with teachers and administrators, are always out in force at public budget meetings to advocate passionately for higher education spending, sometimes accompanied by their adorable children and usually repeating slogans like, “we moved here for the schools,” “the children are our future,” and “great schools support property values.”  For example, the Fairfield Citizen described the scene at one public budget meeting as follows: “The pro-education budget rally, organized by the PTA Council, drew about 60 people, many wearing tee shirts urging ‘no cuts’ and carrying placards urging support for the full school budget.”  Since there is no organization with comparable organizational and communications resources to the PTAs and Teachers Unions urging the other 70% of Fairfield households to speak out and vote, it is easy for this special interest group to become the majority in municipal elections for which, on average, only 30%-50% of registered voters turn out to vote.

However, as we have noted often, even parents who are benefitting most from our public education system must eventually acknowledge the new economic reality and the need to restrain the growth in our spending and taxes, because otherwise it is only a matter of time before everything we love about Fairfield will be at risk, including our schools.  It is simply not possible to restrain Fairfield’s overall spending without restraining the cost of our schools, which as noted above represents 65% of the total.

There are two things you can do:

1.    Attend and speak out at the annual Board of Finance Public Comment Meeting on Saturday, March 30th at 9:30AM in the Ludlowe HS Auditorium.
​
2.    Send an e-mail to All Elected Officials: Please express your opinions to all Selectmen and all Board of Finance and RTM members, using our "1-Click" E-mail button below. ​
"1-Click" to All Elected Officials