Introduction
High Density (HD) housing - be it apartment buildings or other multi-familiy dwellings - is a hot issue in Fairfield. Most people recognize the desirability of more such housing as a benefit to those looking to live in Fairfield in a smaller home and for the increased town diversity HD housing facilitates. Many citizens are concerned, among other things, that significant new high density housing units will exacerbate our traffic issues, further burden town services (schools, safety, public works and community) while paying relatively little in taxes to cover those incremental costs, and possibly permanently changing Fairfield's character for the worse.

From a long term quality of life standpoint, few issues are more important to get right in our opinion. Herein lies the problem and why we at Fairfield Taxpayer are trying to understand the basic issues and the implication of the choices made regarding HD housing. Our goal is to stimulate a well-educated dialog within the town regarding HD housing so that TPZ and our town leadership understand what it is that Fairfielder's want. In short, the town needs the input of informed citizens in order to make a plan that spells out how much HD we want and where we would ideally like it to be placed.  Without this plan, we will undoubtedly be facing a drawn out game of "wack-a-mole" at TPZ meetings for the future, as developers continue to push the boundaries of our ordinates to their advantage, rather than our community's advantage.  See the articles below which illustrate the concern.  Keep in mind that while these projects may not be in your backyard, the "passing" of them will likely make it easier for developers to build HD housing elsewhere in town.
Courts: TPZ Must Issue Affordable Housing Permit on Bronson Road
A Superior Court judge has ruled the Town Plan and Zoning Commission must issue a permit for an affordable housing development on lower Bronson Road. The zoning board’s original denial of the 94-unit Garden Homes project was appealed in 2014, and the courts remanded the case back to the TPZ to reconsider an amended access road plan. After holding a hearing that covered the entire proposal, and not just the proposed modifications, the TPZ again voted against the plan. Read More: Fairfield Citizen 3/9/17
Bronson Road Housing Proposal Denied Again
​The Town Plan and Zoning Commission was asked to reconsider part of a controversial affordable housing proposal. They did, but did not change their minds.

The zoning panel had denied the 8-30g application for a 95-unit building on lower Bronson Road near Interstate 95 in July 2014. Garden Homes, the developer, appealed that denial and the court remanded the application back to the TPZ earlier this year, instructing them to take another look at the access road. The single-access road into the development, with no turnaround, was one of the reasons for the zoning panel’s denial, particularly because of concerns about fire truck access.

According to the lengthy reasons for the latest denial, the TPZ said the court advised “the applicants should submit to the commission a fully-engineered site plan indicating the provision of the turning radii necessary to allow these and other larger vehicles to turn around and exit the site with minimal reverse travel, both via the elimination of four parking spaces and three units, as proposed, and by alternate means.”

The revised application submitted by Garden Homes reduced the number of units to 91, eliminated four parking spaces, and added three handicapped parking spaces and a fire lane. The plan called for a two-foot reinforced shoulder along the driveway. There was no turnaround provided, and at the May 24 hearing, the applicant argued the access drive met the state fire code.

The commission voted unanimously to deny the revised plans. Read more: Fairfield Citizen 7/14/16
An Innovative Approach to Affordable Housing
All across southwestern Connecticut, some of the wealthiest communities in America are grappling with the mandate to make room for those who are not wealthy. Some towns like Fairfield have implemented mandatory inclusionary housing programs, similar to those in New York City; Darien, after spending millions on blocking projects, has started building its own; while Milford, just a few inlets up the coast, has faced down numerous lawsuits and politicians have turned this issue into a reliable get-out-the-vote tactic. Read More: NY Times 4/25/16
Darien Denied 2nd 8-30g Moratorium
After a second review, the State Department of Housing determined that the town of Darien is 4.5 points short of the necessary "housing unit equivalent points" to qualify for a state statute 8-30g moratorium. Read more: Darien Times 3/16/15
Town Map for Perspective at AH Committee Meeting
Below are images of a map that was obtained via FOIA (Freedom of Information Act) from the town's AH Committee.  It is NOT an official part of the AH Plan at this time and may never be.  However, given the generalities of the discussion of AH, we felt it important for citizens to see where the natural targets for AH are: proximate to mass transit, defined as within one half mile of one of Fairfield's train stations or within one quarter mile of bus routes. Download the map, or click on the map sections below to see them enlarged. 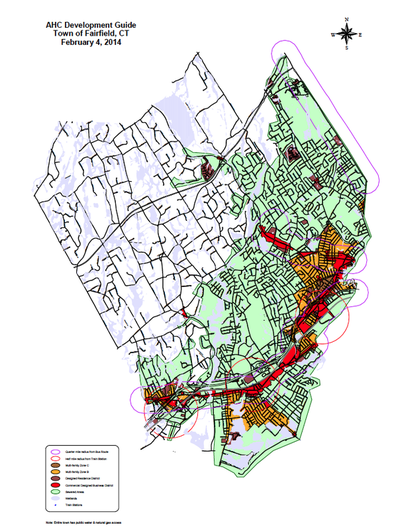 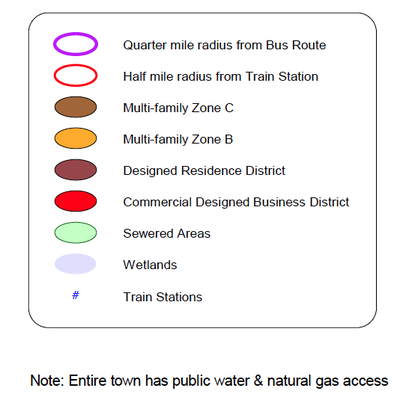 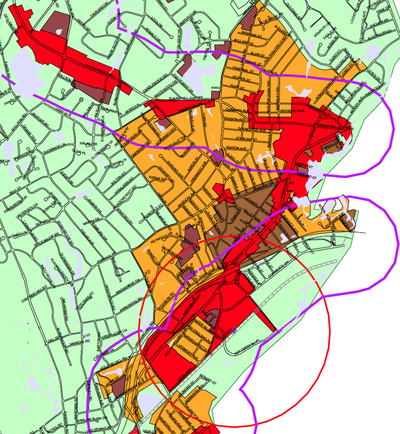 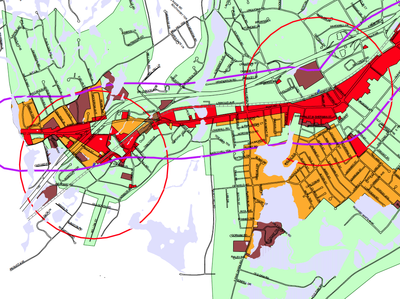 “Fairfield definitely has an 8-30g problem; but without a strategic plan, we don’t know if we have an affordable housing problem.”

Finally, we encourage everyone to participate in the public meeting that will be held in connection with the updated Affordable Housing Plan on Wednesday, September 10th at 7:00 pm at our Board of Education headquarters (501 Kings Highway East).

Developer plans to challenge denial of plan for Bronson apartments
The saga of a 95-unit "affordable" apartment building proposed for lower Bronson Road isn't over yet...John Fallon, the lawyer representing Garden Homes, confirmed Thursday that the Stamford-based developer plans to file an appeal of the denial in Superior Court. He said the applicant has until Aug. 9 to file that lawsuit. Read More Fairfield Citizen 7/31/14

TPZ deliberation, hearings conclude on Bronson Road development
On Wednesday evening, the Fairfield Town Planning and Zoning (TPZ) Commission concluded its discussion at its fourth and final public hearing on the subject of Garden Homes Management’s proposal to build a three-story, 95 unit affordable housing complex at 92 and 140 Bronson Road. The meeting marked the end of over 15 hours of deliberation on the subject.... Read More: Fairfield Minuteman 7/18/14

Bronson apartment plan's fate awaits TPZ vote after four nights of debateJohn Fallon, the lawyer for a developer who wants to build a 95-unit apartment building on lower Bronson Road, had a rough start to his rebuttal at the fourth and final public hearing on the controversial project Wednesday night. Read More: Fairfield Citizen 7/17/14

Affordable Housing Public Forum
Letter from the Chair of the Affordable Housing Committee (AHC) encouraging citizens to attend a Public Forum to discuss issues and elicit public comment relating to Fairfield's affordable housing plan.  The Public Forum will be held on Tuesday, April 1st from 7pm - 9pm at the Board of Education offices at 501 Kings Highway East. Read More: Minuteman News Center 3/21/14