"1-Click" to TPZ about Bronson Rd Proposal
Courts: TPZ Must Issue Affordable Housing Permit
A Superior Court judge has ruled the Town Plan and Zoning Commission must issue a permit for an affordable housing development on lower Bronson Road. The zoning board’s original denial of the 94-unit Garden Homes project was appealed in 2014, and the courts remanded the case back to the TPZ to reconsider an amended access road plan. After holding a hearing that covered the entire proposal, and not just the proposed modifications, the TPZ again voted against the plan. Read More: Fairfield Citizen 3/9/17 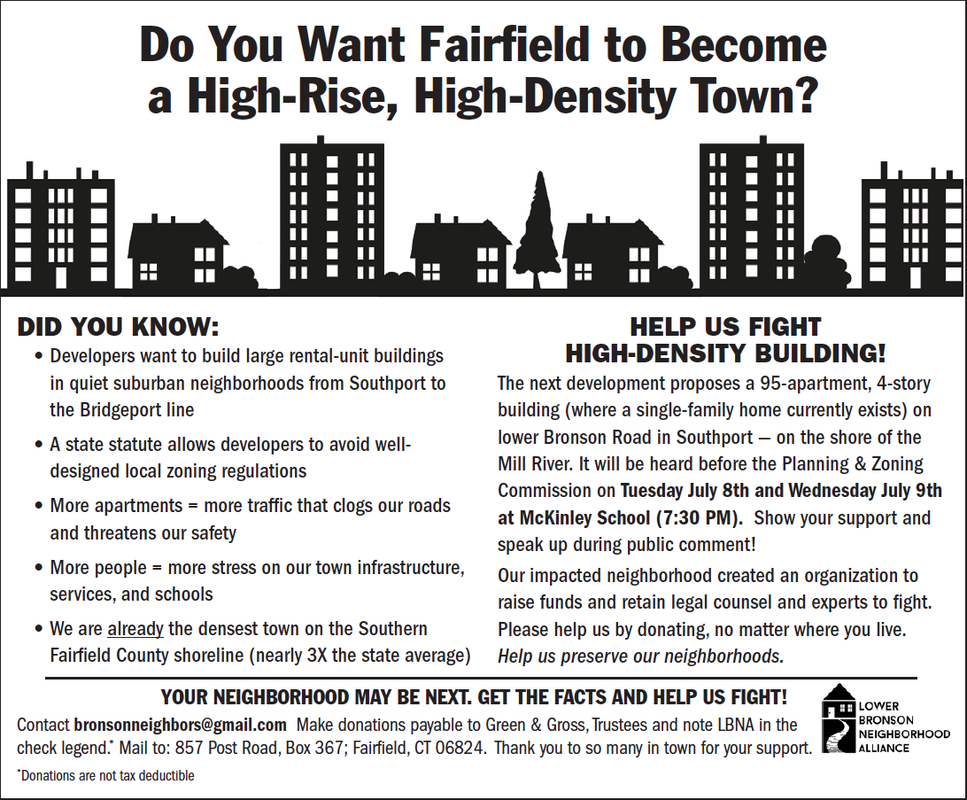 Bronson Road Housing Proposal Denied Again
​The Town Plan and Zoning Commission was asked to reconsider part of a controversial affordable housing proposal. They did, but did not change their minds.

The zoning panel had denied the 8-30g application for a 95-unit building on lower Bronson Road near Interstate 95 in July 2014. Garden Homes, the developer, appealed that denial and the court remanded the application back to the TPZ earlier this year, instructing them to take another look at the access road. The single-access road into the development, with no turnaround, was one of the reasons for the zoning panel’s denial, particularly because of concerns about fire truck access.

According to the lengthy reasons for the latest denial, the TPZ said the court advised “the applicants should submit to the commission a fully-engineered site plan indicating the provision of the turning radii necessary to allow these and other larger vehicles to turn around and exit the site with minimal reverse travel, both via the elimination of four parking spaces and three units, as proposed, and by alternate means.”

The revised application submitted by Garden Homes reduced the number of units to 91, eliminated four parking spaces, and added three handicapped parking spaces and a fire lane. The plan called for a two-foot reinforced shoulder along the driveway. There was no turnaround provided, and at the May 24 hearing, the applicant argued the access drive met the state fire code.

The commission voted unanimously to deny the revised plans. Read more: Fairfield Citizen 7/14/16
Fire Safety Still Flashpoint in New Review of Bronson Apartments
​Fire Chief Denis McCarthy told a Town Plan and Zoning Commission hearing Tuesday that a redesigned turnaround would not enhance safety at a 91-unit apartment building proposed, under the state's affordable-housing statute, for lower Bronson Road. The application filed by Garden Homes was rejected unanimously by the commission in July 2014, but a Superior Court judge overturned the denial last September. The application was remanded to the commission to review a revised site plan first offered by the applicant on the last night of the original hearings. Read more: Fairfield Citizen 5/25/16
TPZ Commission Meeting re: Bronson Road Project
​On Tuesday, May 24th, the Town Plan and Zoning Commission will conduct a hearing on the Bronson Road affordable housing application. The hearing is the result of a remand from the judge hearing the developer’s appeal against TPZ denial of the project. The hearing is limited to the topic of Fire Department access to the site and will feature testimony from experts. The public can speak but only on the fire access issue. Click here for further background on this issue.

What:   TPZ Commission Hearing on Bronson Road Affordable Housing Application
When:  Tuesday, May 24th, 7:30pm
​Where: McKinley School Cafeteria, 60 Thompson Street
Developer wins round in Bronson Road Fight
Last week the Conservation Commission heard about — and unanimously approved — a measure that will allow several hundred feet of grass along a curbside at a proposed development to be dug up and replanted atop two feet of gravel so that fire trucks, should the need arise, could get firm footing. Whether or not its decision was technically the correct one, or exactly what the commission based its decision on, remains subject to debate. Either way, the fight appears to be far from over. Read More: Fairfield Minuteman 3/12/16

Do over: Court orders zoners to reconsider denial of Bronson apartments
A state Superior Court judge in Hartford has reversed the Town Plan and Zoning Commission’s rejection of a controversial proposal to build a 95-unit affordable housing development on lower Bronson Road. The zoning denial was appealed by the applicant, Garden Homes Management, in July 2014. Read More: Fairfield Citizen 9/16/15

Developer plans to challenge denial of plan for Bronson apartments

The saga of a 95-unit "affordable" apartment building proposed for lower Bronson Road isn't over yet...John Fallon, the lawyer representing Garden Homes, confirmed Thursday that the Stamford-based developer plans to file an appeal of the denial in Superior Court. He said the applicant has until Aug. 9 to file that lawsuit. Read More Fairfield Citizen 7/31/14

TPZ deliberation, hearings conclude on Bronson Road development
On Wednesday evening, the Fairfield Town Planning and Zoning (TPZ) Commission concluded its discussion at its fourth and final public hearing on the subject of Garden Homes Management’s proposal to build a three-story, 95 unit affordable housing complex at 92 and 140 Bronson Road. The meeting marked the end of over 15 hours of deliberation on the subject.... Read More: Fairfield Minuteman 7/18/14

Bronson apartment plan's fate awaits TPZ vote after four nights of debate
John Fallon, the lawyer for a developer who wants to build a 95-unit apartment building on lower Bronson Road, had a rough start to his rebuttal at the fourth and final public hearing on the controversial project Wednesday night. Read More: Fairfield Citizen 7/17/14